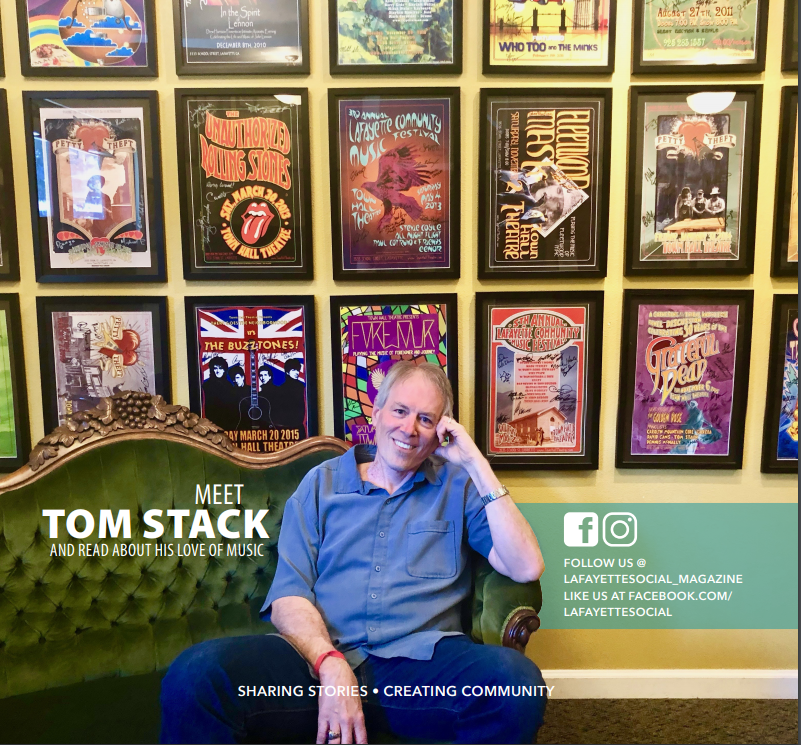 Lafayette resident Tom Stack may deal in real estate during the day, but by night he brokers only rock and roll. As the Vice
President of the Board at Town Hall Theatre (THT), Tom has produced over 50 concerts and comedy events for the historic
theater space, converting thousands of new fans and raising tens of thousands of dollars for THT.

“It’s a whole different way to experience the building,” said Tom. “It’s hooting and hollering and rock and roll. People are coming
from everywhere and they have a gas.” 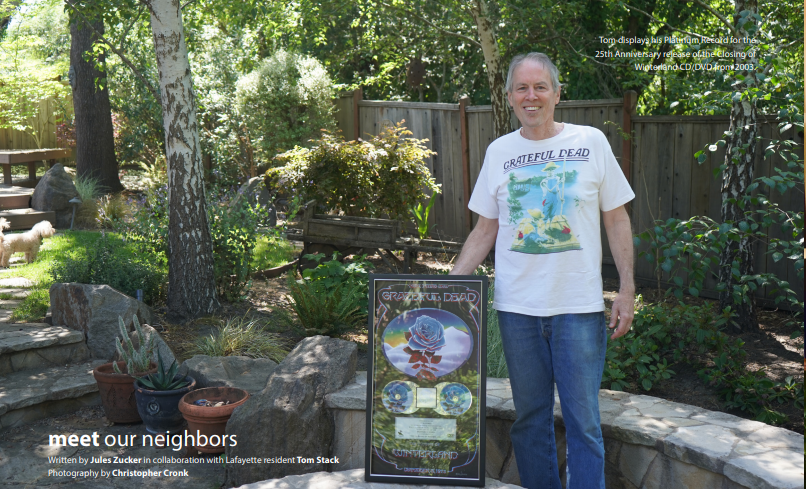 Since becoming involved with THT in the mid-2000s, Tom has built the Music and Comedy Series into a thriving program
featuring the Sun Kings, Petty Theft, Midnight Flyer and others. Tom and his wife Kiki have also produced the successful
Lafayette Community Music Festival, barreling towards its 10th year. But before he became a fixture in the Lafayette live music scene,
Tom got his start as many young rock-and-roll fans are wont to do: as the unofficial king of Grateful Dead merchandise from the
mid-’80s to the mid-2000s.

Growing up in San Francisco, Tom first became interested in the Grateful Dead when his high school teacher had the class break
down the lyrics to “Truckin.’” When the band played a five-night “farewell” run at the Winterland Ballroom in 1974, Tom was all in
“I went with all my buddies, ‘cause the band was going to retire, and then in 1976 they came back,” said Tom. “So my line was
that I had to see them once, and then I ended up seeing them 433 times in four countries and 27 states. I toured all over the
country and Europe with them.” 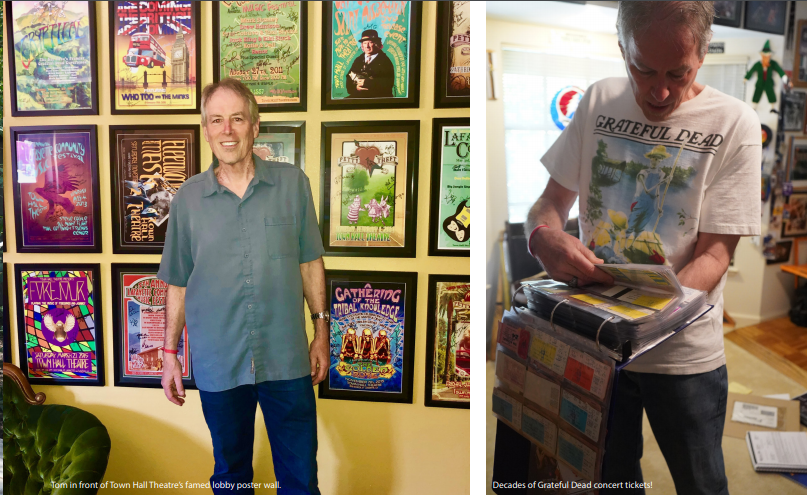 Tom continued going to Grateful Dead shows throughout his college years at Santa Clara University and his post-grad employment
at a Santa Clara tech company. But in 1984, strung out on the Silicon Valley, Tom quit his job, briefly moved to Denver,
learned how to bartend, and eventually started selling unofficial Grateful Dead tee shirts on the band’s tour.

“The 1984 fall tour began in Charlotte. We landed in New Jersey at 7a.m., and made it to Charlotte by the second set,” said Tom.
“From Charlotte all the way up to Maine, I sold those shirts.”

After selling Grateful Dead tees everywhere from the coast to the Midwest to St. Thomas, Tom realized that he had stumbled
upon a career in rock-and-roll merchandising. Though his guerrilla tee-shirt operation began out of a basement in the Haight,
Tom’s designs were so popular that he eventually began working on official merchandise for Grateful Dead tours.

“I ended up building my business [making and selling Grateful Dead merchandise] for 15 years, selling to 600-plus stores
around the country,” said Tom. “A complete economy was born around this band. My designs sold out in Madison Square Garden,
Boston Garden, the Greek Theatre, everywhere. Looking up and seeing everyone wearing your art, it’s an incredible feeling.” 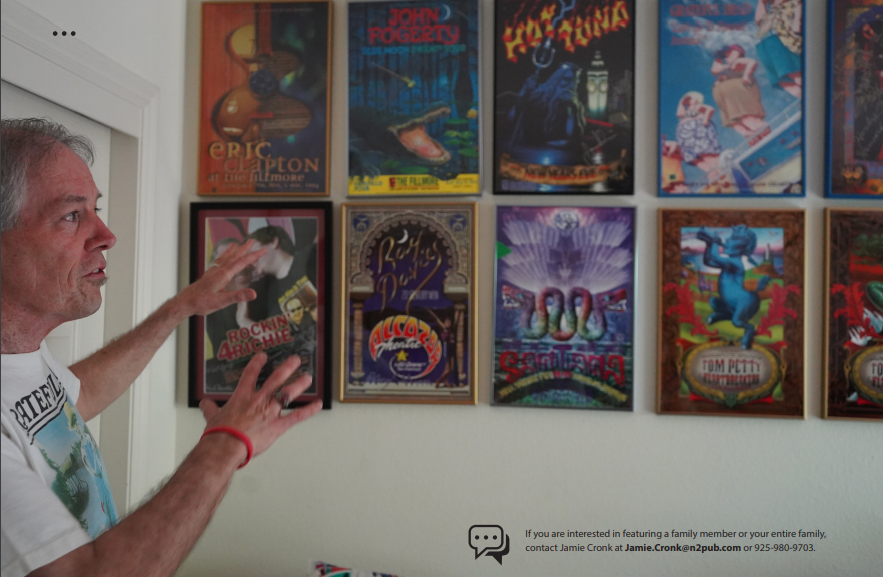 After Jerry Garcia’s death in 1995, Tom spent a handful of years working on merch for Carlos Santana before moving
to Lafayette in 2001. He served as VP of Licensing and Merchandising for Grateful Dead Productions from 2002–2006 while studying
real estate at night, eventually making the official switch to brokerage and joining Orinda’s Coldwell Banker in 2006. But Tom
wasn’t finished with the Grateful Dead just yet. 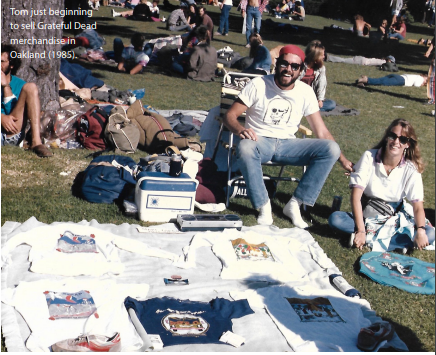 “In 2007, I put on a show at Town Hall Theatre, a Grateful Dead tribute band,” said Tom.
“We got a signed Bob Weir guitar, rare photos and swag, had a huge auction, and we made Town Hall Theatre about $15,000.”
Tom has been filling seats at THT for live music events ever since joining the board in 2009. After all, no one understands
the bonding power of music better than Tom Stack. This Deadhead is using his business savvy to help keep East Bay rock and
roll very much alive.

“Being a realtor is a great career, it’s an avocation and it encourages
creativity. It also allows me the flexibility to bring music to a community that didn’t have it,” said Tom.
“This all benefits a 105-yearold building – we’re bringing in people who have lived in Lamorinda
for 25 years but have never been inside Town Hall Theatre.”